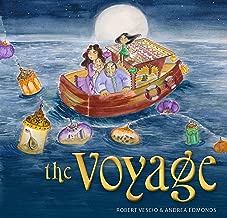 The Voyage, by Robert Vescio and Andrea Edmonds, is a visual narrative created to help children reflect on the refugee experience. In this short picture book, moody and atmospheric illustrations take the lead with only single albeit powerful word orienting the reader to the action depicted.

The story follows a family fleeing violence in their home country.

The single word “chaos” appears on the first two-page spread. The illustration gestures towards the violence of war. There are balls of fire and smoke as well as families running from the destruction.

The word “escape” appears on the next page as a family of four drifts away from lush land on a small boat. The next page provides a closeup of a young girl, eyes closed, face leaning up with snapshots of the life she’s leaving behind appearing in her mind. Other images show the vastness of the sea the family drifts on, which emphasizes nature and humanity in both its strength and fragility.

The family is rescued and brought onto a large ship where they meet other refugees. They are then brought to land where they are welcomed into a lovely community. The family ends up picnicking and sharing their culture with new neighbors.

Edmonds based the characters on Middle Eastern refugees, thinking, perhaps of Syrian refugees fleeing civil war. However, the story seeks to capture the feeling of fear that compels refugees to make uncertain voyages to lands that don’t always welcome them, not the facts.

There is a dreamy vagueness to the story, which includes no clear sense of the passage of time.  The often-whimsical illustrations also create a fantasy space. It is a beautiful book that will surely invite children to imagine and discuss the sensitively rendered subject.

I think this book will work well for very young readers, because it doesn’t rely on words to explore an emotional experience, instead encouraging visual literacy and discussion. I think it could serve a similar purpose for older readers, but would recommend pairing it with more realistic representations of refugee experiences as this book neither provides a detailed sense of the material conditions pushing refugees from home nor a realistic portrait of what refugees likely experience when trying to create a new one.

I expect this text to be quite well received when released November 12.