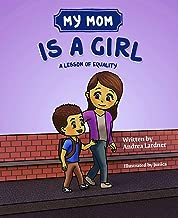 My Mom is a Girl: A Lesson of Equality is a recent Mascot Books publication written by Andrea Lardner and illustrated by Junica.

The book focuses on the relationship of a young boy named Taj and his mother. Mother and son both have light-brown skin, rosy cheeks, big brown eyes, and dark brown hair. The story opens with mother and son reading a bedtime story about equality.

The next day Taj’s mom drops him off at school. When he enters the school, he is greeted by two friends, girls named Zola and Neo. Later that day, on the playground, a bully named Mitch pushes Zola. Mitch pulls Neo’s hair when she comforts Zola. Taj sees Mitch bullying his friends and runs to their defense. After Neo and Zola describe Mitch’s bullying behavior to Taj, Mitch dismisses them saying: “They’re just girls…”. Taj then asked Mitch how he would feel if someone was mean to his mom just because she is a girl. This seems to register with Mitch who is depicted with eyes wide in surprise. He pictures his mom in his mind and admits he would be very sad because he loves his mom. He then apologizes to the girls who generously accept his apology. When Taj’s mother picks him up from school he tells her all about his day and wonders what book she’ll read him that night.

This book delivers its strong message effectively. Junica’s illustrations complement the story nicely. I particularly liked the simplicity of the text, which makes it shareable with even very young children. I also appreciate the way mother and son bedtime rituals, including reading, frame the text showing the importance of having important conversations about inequality and bullying at home.  Lardner does a great job connecting bullying to larger social issues to show how it functions on the individual level to uphold structural inequalities. Although very young readers will not pick up on this, the message is available to slightly older audiences.

My Mom is a Girl: A Lesson of Equality would work well in schools to encourage discussions about bullying, especially ways to effectively intervene in behavior that perpetuates inequality.

I’ll certainly share this story with my  little boy at bedtime!