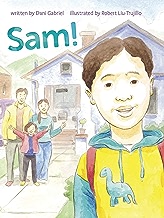 Sam!, Penny Candy Books’ upcoming release about a transgender boy’s decision to share his gender identity with his family, is thoughtfully written by Dani Gabriel and warmly illustrated by Robert Liu-Trujillo. The story centers on a racially ambiguous family, all with thick dark hair and tan skin warmed by yellow undertones. This makes it one of only a handful of queer children’s books to engage both racial and gender diversity through major characters.

Sam is a nine-year-old transgender boy who likes riding his bike, making dinosaurs out of clay, and learning about US history. Sam has a sometimes-strained relationship with his bossy, know-it-all, 11-year-old sister Maggie. Both children are “filled with dreams and spirit and laughter” and they share a beautiful bond that’s realistically described and touchingly illustrated.

Alone Sam is just Sam, and that’s how readers are introduced to him. However, Sam’s identity gets more complicated when he is around other people because they think he’s a girl named Isabel. Sam is sad because, as Gabriel writes: “Nobody knew that he was a boy except him.”

His sister, Maggie, can tell something is wrong and one day, when he leaves school crying, she confronts him. Sam is “too scared” and “too sad” to tell her why he is upset.

Later that day, when the children are alone in the room they share, Sam does approach her. He explains that he has never felt like a girl and tells her his name is Sam. He also shares that at school a child claimed boys and girls are born different, which upset him. Maggie is quick to accept Sam and assures him she will be his biggest supporter.

One evening, as the family dines at a neighborhood taqueria, Maggie prompts Sam to explain everything to their parents. Like Maggie, they are quick to accept him. His father takes the lead, asking Sam if he is happy and assuring him that they will learn what they need to learn together.

In most queer children’s literature mother-child relationships are highlighted and it is mothers who are most often active participants in their child’s coming out stories. By depicting the whole family, and highlighting Sam’s father’s acceptance, Gabriel subtly disrupts entrenched domestic gender roles.

The text explores resilience – the risk of rejection and the joy of reward.

Sam’s feelings are described with straight forward language, simple adjectives like “hurt,” “scared,” “sad,” and “terrified.” Much of the feeling is subtly expressed in Liu-Trujillo’s illustrations, particularly the body language and facial expressions of characters. This gives the reader space to think through and reflect on the story, to interpret, and respond.

Although the story is accessibly written, I think it is more likely to appeal to children 7 – 11 years old who will possibly relate to Sam or Maggie, and be able to imagine what it means to be brave and compassionate with yourself and those you love.

I would like to see this in classroom libraries, shared with children who might need it very much. It’s a welcome addition to the growing number of books about transgender children published in recent years.