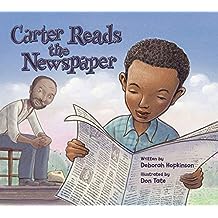 Deborah Hopkinson makes history accessible to young readers through remarkably engaging and accessible children’s picture books. Her recent publication, Carter Reads the Newspaper, is no exception. Although I was planning on sticking to #ownvoices books throughout Black History Month, Hopkinson’s book is a wonderful description of Carter G. Woodson’s life and a moving description of the founding of Black History Month, so it seemed only fitting to include it.

Carter G. Woodson established what was then called Negro History Week in 1926. According to Hopkinson, he was partially motivated by his desire to prove a Harvard history professor, who told him Black people had no history, incorrect.

Woodson earned a PhD in history from Harvard and became a trailblazing public intellectual. Along with important academic contributions to Black American history, Woodson is known as the father of Black History Month, a project that helped make Black history accessible to a non-academic audience.

Woodson’s relationship to newspapers anchors Hopkinson’s book. He was born to two formerly enslaved Black Americans and, although his father was illiterate, he was invested in informed citizenship. Woodson would read newspapers to his father whenever he could.

Woodson’s high school education was deferred so he could work, earning money for his family. While working the mines of West Virginia, Woodson met a Black Civil War Veteran named Oliver Jones. Like, Woodson’s father, Jones was illiterate, but committed to learning. He invited Black men to his home to discuss current events, since Woodson was literate, he became a valuable member of the community, reading newspapers and researching information the men wanted to learn more about.

Woodson worked in the mines for three years before slowly pursuing his education, finally earning a PhD at thirty-seven-years-old.

Hopkinson’s picture book is fairly text heavy and most appropriate for readers over seven-years-old. She provides useful information in her back matter, including resources to learn more about Carter G. Woodson and information about important Black figures in US History.

Carter Reads the Newspaper will make a strong edition to classroom libraries. Although, in many ways it reads like a biography, Woodson is clearly entrenched in communities, and inspired by the stories of the people in his life.