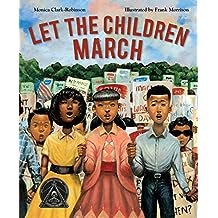 Let the Children March, written by Monica Clark-Robinson and illustrated by Frank Morrison, is a brilliant and bold children’s picture book that brings the Birmingham Children’s Crusade of 1963 to life for young readers.

In the South, Jim Crow laws enforced segregation, which led to unequal access to education, employment, health care, and housing. Leaders in the Black Civil Rights movement came up with many strategies to end segregation.

A powerful strategy of resistance, peaceful protest, prompted the Birmingham Children’s Crusade of 1963. Children took to the streets to demand equality. Hundreds of brave young people were arrested, beaten, bullied, attacked with powerful hoses, and threatened with dogs. They continued to march. Images of their protest, and the violent state sanctioned response to it, were televised. Many of the protester’s demands were begrudgingly met as a result of the protest.

On page after page, Morrison’s images capture the complex emotions of all involved. Each illustration truly is a work of art. He unflinchingly conveys the brutality experienced by children. In a two-page spread, several Black children huddle against a building as three white men spray them with water that pounds their vulnerable bodies. Two dogs rip the clothes off children, drawing blood in the process.

In thoughtful words and detailed illustrations, this pivotal moment in US history is made accessible to children in all its pain, shame, and pride. Morrison’s images show what Clark-Robinson’s sparse, carefully chosen words tell.

While reading, it is impossible to ignore racism’s presence in US history, and of course, its present. Empowering back matter addresses children as activists who can become educated and participate meaningfully in community life.

This book will make a wonderful addition to school and personal libraries. It would work well as part of a multidisciplinary lesson about history, literature, and civic engagement.