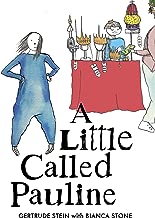 In one of Penny Candy Books’ newest publications Bianca Stone shapes Gertrude Stein’s modernist poem “A Little Called Pauline” into a beautiful story about a woman’s motherhood journey. It is a challenging and pleasurable book that little readers and their grown-ups can get lost and found in as they laugh at the silly lyrical sounds that Stone coaxes into something akin to sense.

It begins with an image of a very pregnant woman with a cat on her lap scratching her head and holding her belly. The opening line of Stein’s poem frames the image: “A little called anything shows shudders.” Readers can imagine the vibrations the seated woman’s hand catalogues as she feels her baby moving below the surface of her skin. In the next image, the soon-to-be mother, suitcase in hand, takes a taxi to the hospital where she delivers Pauline. After this, the new mother rests in a hospital bed holding her baby. She is clearly a single mother and subsequent images depict her caring for Pauline, images evocatively interpreting the poem as a testament to the whimsy and intimacy that is family.

The moods and wants of childhood eventually take over the story as Pauline becomes the focus of sulky and sullen illustrations that create climax and resolution despite the poem’s insistent lack of literal meaning.

I enjoyed this book thoroughly and have read it to my four-year-old multiple times. He adores the sounds and images Stone unites to form a story that is a true delight! I recommend this very special book to poetry fans and all readers who like thinking better outside of the box.