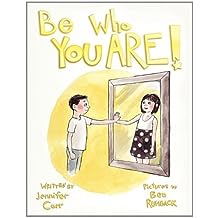 Be Who You Are (2010), written by Jennifer Carr and illustrated by Ben Rumback, explores a young transgender girl’s transition. Although Hope’s sex assignment was male, she always felt like a girl. She tells her very accepting parents while she is quite young, and they support her. However, Hope isn’t comfortable being as open about her gender identity at school, and her gender is repeatedly policed by a teacher who sees her as a boy. This happens when Hope draws a picture of herself as a girl and when she stands in line with other girls.

When Hope shares her discomfort at school with her parents, they become advocates. They introduce her to a therapist who encourages her to share her feelings about gender. Hope soon begins to transition; first growing her hair long, and then wearing girl clothes more and more frequently. Like her parents, Hope’s younger brother becomes a supportive ally.

This is one of a small handful of books about transgender children. Carr is a parent-advocate of a transgender child and Be Who You Are is unambiguously trans* affirming throughout. It provides an accessible trans* narrative for young readers.

I prefer Jessica Herthel and Jazz Jennings’ I am Jazz, which delivers a similar story but is co-authored by a transgender child and told in the first-person. However, this book predates I am Jazz by several years and depicts its important lesson of transgender acceptance very nicely.