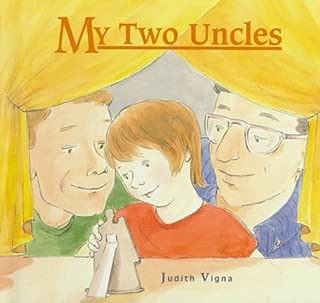 Judith Vigna’s My Two Uncles was published by Albert Whitman & Company in was published in 1995. Vigna has authored a long list of social issue picture books including Black Like Kyra, White Like Me, I Wish Daddy Didn’t Drink So Much, Mommy and Me By Ourselves Again, and Saying Goodbye to Daddy. My Two Uncles, like her other titles, seeks to write into children’s books realities too frequently absent from them. In this case she explores same-gender relationships from the first-person point-of-view of a child, Elly, who loves visiting her two uncles. Unlike most books that represent lesbian and gay adults from the period, this one mentions the word “gay.”

The family highlighted is white and the story is set in a city. The protagonist’s uncles live in an apartment and he lives with his parents and grandparents.

Conflict makes its not-so-subtle entrance into the text when the family plans a big anniversary celebration for the protagonist’s grandparents. Her grandfather is not so accepting of Uncle Ned’s “friend” and explains that he isn’t welcome in the house. Elly’s father pushes back, reminding her grandfather that Ned and Phil have lived together for five years and telling his father he’ll have to eventually meet Phil. Elly is confused about her grandfather’s dislike for Phil, a man he’d never met. Her father explains that it is because Phil is gay. He then explains what gay means to Elly. He even explains homophobia to her. This makes Elly more upset and protective of her uncles.

Although Elly’s grandfather doesn’t end with an ah-ha moment and clear acceptance of his son, he does seem to have a slight change of heart. The last image in the text is of Elly’s grandfather standing by his car as Elly, her grandmother, Ned and Phil wave to him from their apartment window. It does seem clear that if he doesn’t get over his homophobia, he will be the outsider in the family.