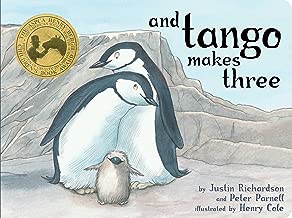 And Tango Makes Three (2005), written by Justin Richardson and Peter Parnell and illustrated by Henry Cole, is a Simon & Schuster Books for Young Readers publication. The book is based on an event that took place at Central Park Zoo. Two male penguins, Roy and Silo, raised a chick together. It made the American Library Association’s most banned book list eight times between 2006 and 20017, in the years 2006, 2007, 2008, 2009, 2010, 2012, 2014, and 2017. Censors, most often moralistic parents, were and continue to be concerned that the book is homosexual propaganda.

The authors tell Roy and Silo’s story as a love story. In fact, one page lingers over a “courting” of sorts. In four panels Roy and Silo are depicted together bowing, walking, singing, and swimming. After witnessing their relationship, the zookeeper, Mr. Gramzay, assumed the male penguins were in love because their behaviors resembled those of the penguins who were mating. They even built a nest for an egg they didn’t have, like other penguin couples. Soon, Mr. Gramzay found an egg that wasn’t being taken care of and placed it in Roy and Silo’s nest. Eventually, the well-cared for egg cracked and a chick with “fuzzy white feathers and a funny black beak” emerged. Mr. Gramzay called the chick Tango. Roy and Silo continued to care for Tango, making sure she was fed and warm.

Perhaps this book bothers conservatives so much because it challenges they idea that heterosexuality is “natural” by finding an example of homosexual appearing love in nature. Perhaps they’re bothered that the story is mapped onto zoos and animals, too things children love. Perhaps its because the book represents family as available to everyone – even “gay” penguins.

I wonder if the book’s success is, at least partly, related to the controversy it prompted. There are other, queerer, books out there – why this one? It would be interesting to figure out the relationship between the books infamy and its popularity. A fine story, accessible to young readers, but I’m not a huge fan of anthropomorphizing animals so this isn’t my favorite read.