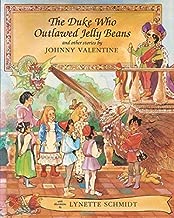 The Duke Who Outlawed Jelly Beans (1991), written by Johnny Valentine and illustrated by Lynette Schmidt, is an early Alyson Wonderland publication full of whimsy and charm.

The first story, “The Frog Prince,” is about a boy, Nicholas, who discovers a talking frog. The frog informs Nicholas he is really a prince and needs to be kissed to be transformed back into his true form. Nicholas begrudgingly plants a kiss on the frog and it does, in fact, transform into a prince. The prince explains that his parents could be cruel and as punishment for a minor offense had  permitted a wizard to experiment on him.

The wizard turned the boy into a frog and would eventually change him back only to repeat the process next time the boy was punished.

Nicholas liked his new friend, the prince, and returned with him to the castle where he tricked the wizard and learned how to transform the frog back into a boy. After successfully transforming the prince, Nicholas suggests he come live with him, his father, and his father’s “friend” Karl. Nicholas  explains that they always wanted another child and would be happy to adopt the prince like they adopted him. Nicholas is, of course, right, and the four live happily ever after.

The story quietly challenges the idea that heterosexual families are better than queer ones by allowing two gay dads to rescue the prince from cruel heterosexual royals.

In another tale, “The Eaglerider,” a girl named Scarlett wants to ride the eagles that protect her home by spotting dragons before they can do harm. However, this opportunity is only available to boys. Her supportive mother shares a story from her past. When she was young, she fell in love with a woman and because people didn’t approve, she cut her hair short to pass as a man. She suggests her daughter do the same. Not only does Scarlett become an eaglerider, she becomes the best eaglerider and saves the kingdom, which changes everyone’s idea about who can do what.

The title story, “The Duke Who Outlawed Jelly Beans,” is about the young Grand Duke Archibald who is left in charge of the kingdom when his parents go on a trip. He has a heightened sense of importance and makes ridiculous decrees, including outlawing jelly beans, to have an excuse to show off his power and authority. A young girl named Anna is his biggest critique. Anna has two moms. When the Duke declares all children should have one mom and one dad and, further, that anyone with too many or too few moms or dads would be put in a dungeon, Anna leads a rebellion. All the children in the kingdom with the “wrong” number of moms and dads join.

The author, Valentine, uses this opportunity to bring characters from other stories back into his tale. This includes Nicholas and the prince, who took the name Jesse when he started his new life. The plan was to mock the duke and his rules so completely that everyone would begin to recognize how absurd he was and refuse to follow his orders. It worked! When the duke tried to enforce his last decree and bring children with the wrong number of moms and dads to the dungeon everyone laughed at him. Humiliated he ran to his coach and left the kingdom forever.

I love how closely Valentine’s stories parallel tradition folktales, teaching valuable, in this case queer, lessons. I had to purchase a copy for myself and my little guy.

Because these are fantastical tales they hold up remarkably well over time. I think this one is worth hunting down to add to personal collections!