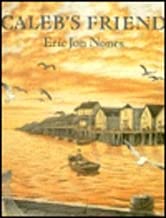 Caleb, a tan-skinned boy of about twelve, is an orphan who works on a boat. One day an icy-blue skinned merboy approaches the ship to return a harmonica Caleb has accidentally dropped into the sea. The human boy and merboy continue to meet, but they exchange objects like shells and flowers instead of kisses.

These scenes are gorgeously rendered, often lingering on the merboy’s slim form. One day, the merboy is caught in the fishers’ net and the ship’s captain sells him to a merchant who puts him on display for money. Caleb saves the merboy and reunites him with the sea. The merboy reciprocates the favor, saving Caleb and his shipmates during rough weather. The boys eventually part ways, although the text ends by noting that every year Caleb returned to the village near his adventure with the merboy to throw armfuls of flowers into the sea. This dabbles in the trope of doomed queer love that appears frequently in LGBTQ young adult literature and LGBTQ cinema.

Most reviewers do not read Caleb and the merboy’s relationship as queer. Perhaps the artistry of image and text or the prestige of the press kept this book from being widely acknowledged as a queer love story. For instance, Kirkus Review refers to the boys as friends, obscuring the sensual relationship between the boys by foregrounding the relationship between tone and text: “Almost more a mood piece than a story, the quietly elegiac text and enigmatic tone are perfectly in harmony with skillfully rendered art” (Kirkus Review). A Publishers Weekly review similarly displaces the romance between boy and merboy by describing the relationship between image and text: “In a powerful union of graphics and words, Nones uses a dusk-colored palette for his haunting, strikingly detailed depictions of the sailing vessels and dress of a simpler time” (Publishers Weekly). Apparently mainstream reviewers recognized a harmonious union but could not acknowledge the relationship between merboy and boy as its clearest expression.