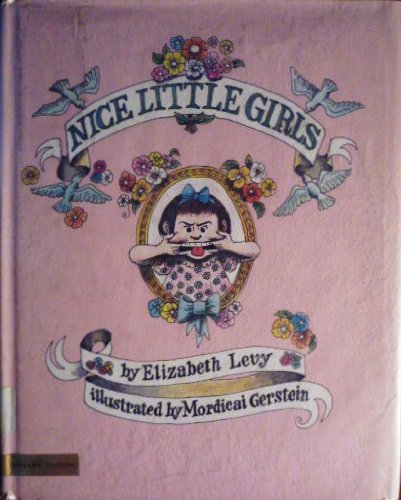 Nice Little Girls (1974), a Delacorte Press publication written by Elizabeth Levy and illustrated by Mordicai Gerstein, explores the challenges of being a tomboy, particularly when boyish behaviors are paired with short hair, overalls, and sneakers that highlight how difficult reading gender can be.

When Jackie begins her first day at a new school her teacher, Mrs. James, introduces her as a boy, only to be loudly corrected by the boisterous girl. Of course, the class erupts in laughter at the expensive of both Jackie and her teacher. On the playground her new classmates continue to make fun of her gender expression telling her she’s really a boy, not a girl. Jackie is so upset she holds back tears while mulling over what it would mean to agree with them and just be a boy. This idea cheers Jackie up and she begins to march around the playground shouting “I’m a boy.” Although her peers first think she’s weird, they quickly follow her lead. Levy writes: “Jackie felt good for the first time that day.”

Jackie’s teacher, Mrs. James, ends up being her biggest obstacle and gender critic. Whenever Mrs. James asks for volunteers to help her use the projector or build a box, Jackie enthusiastically waves her hand in the air, only to be told those are boy jobs. Jackie interrupts her teacher stating she is a boy, but her teacher dismisses her.

A glum Jackie heads to the bathroom and decided to try out the boys’ room. She is confused and disturbed by urinals and quickly runs to the girls’ room. The author provides readers a brief window into Jackie’s psychic life: “She knew she couldn’t really be a boy, but she wasn’t going to be the kind of girl Mrs. James liked, either.” This moment of self-reflection is empowering but it is ultimately disappointing insofar as it locates the truth of gender on the sexed body, a point reinforced by its connection to the bathroom and Jackie’s confusion about urinals.

Jackie continues to reject gender stereotypes and “pretend” she is a boy, until her frustrated teacher complains to her parents.

Jackie’s supportive parents assure her they love her and explain that Mrs. James has a narrow idea of what girls can and should do.

Back at school, Mrs. James continues to police Jackie’s gender, but with the support of her parents, Jackie begins to reclaim being a girl, even though she continues to be a girl who loves to build things. One of the popular pretty girls, Susie, who bullied her when she started at her new school, soon befriends Jackie. It turns out feminine Susie is also a budding gender outlaw. She has an epic train-set in her attic bedroom. Shortly thereafter, Susie invites Jackie to her birthday party, much to the chagrin of her friend and fellow sometimes-bully, Barbara. When Barbara complains about Susie inviting a “boy” to her party, Susie paints a mustache on Barbara and calls her a boy. This quickly ends in giggles and all three girls sporting painted mustaches. Mrs. James ends up with a painted mustache of her own!

The book is charmingly illustrated and told with depth and clear passion for its subject. If I were reading this with children, I would certainly pair it with more recent texts that do not locate the truth of gender on the body, but I also think this can be a very empowering story for children. I always appreciate the message that sometimes adults are wrong, which is the clear message of Mrs. James’ character. A fun read and very cool snapshot of 1970s feminist children’s books!