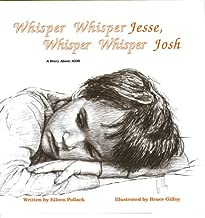 Whisper Whisper Jesse, Whisper Whisper Josh: A Story About AIDS (1992), written by Eileen Pollack and illustrated by Bruce Gilfoy, is an early picture books that explores a young boy’s experience processing grief after losing his uncle to AIDS.

The text-heavy story pairs wordy prose with detailed sketches of a boy as he describes the secrets and whispers that fill his home. Unlike most stories that explore similar themes and foreground the close relationship between uncle and nephew or niece, Jesse is estranged from his Uncle Josh and only meets him after he becomes ill. Jesse’s mother explains that his father and uncle had a fight, but the reader, like the child, never learns why. Jesse’s sick uncle moves in with the family, which makes his mother happy, because she missed her brother, Josh.

The young boy helps bridge the relationship between his uncle and father. However, as the family bonds, Uncle Josh grows sicker. He eventually ends up in a hospital, more news Jesse’s parents are not forthcoming about.

It is Jesse’s cousin who tells him Josh has AIDS because “he was a bad man.” Silence reproduces a sense of shame and stigma around AIDS, which is exasperated by the lingering bad man characterization that Jesse never discusses with the adults in his life.

Uncle Josh’s death is abrupt and cloaked in secrecy. He is rushed to a hospital in the middle of the night as Jesse sleeps. Many secrets are never resolved, such as why Jesse’s father was so angry at his uncle that Jesse didn’t meet him until he was dying, or why Jesse’s cousin referred to him as a bad man. The text, like others that explore AIDS through implied gay uncles, isolates the uncle from any semblance of a queer community, and in this instance, extended family are also absent. It’s a sad story, uncomfortable, and awkward. This is dramatized by the illustrations which only ever depict a glum looking Jesse alone, without the comforting presence of any family members.