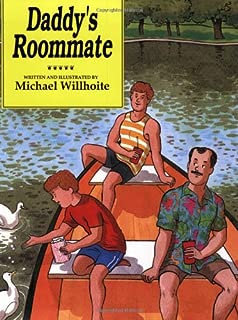 Michael Willhoite’s Daddy’s Roommate was published in 1990 by Alyson Wonderland, the children’s literature imprint of Alyson Books, and was one of its top grossing children’s books of all time.

The simply told story is narrated by a young boy about a year after his parents’ divorce. His father has moved in with a man named Frank. Colorful illustrations show Frank, the boy’s father, and the boy in typical family scenes. Additionally, several images paired with brief descriptive text show Frank and the boy’s father engaged in everyday household activities from cleaning and eating to sleeping, all of which they do together.

The boy and Frank have a usual adult-child relationship. To depict this, images are again paired with short descriptive text, this time showing Frank and the boy playing catch, reading books, and catching bugs.

The boy’s mom explains that Frank and his dad are gay, which the boy accepts as just another way to love someone.

This is an accessible read, bold for its time, in such a straightforward depiction of divorce and gay parenting. Although there are many books with a similar message now this is a classic that still belongs on our bookshelves.