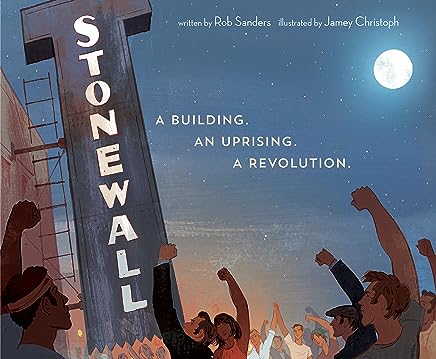 In his recent children’s picture book, Stonewall (2019), author Rob Sanders makes the Stonewall riots of 1969 accessible to a young audience.

Sanders creatively tells the story  from the point-of-view of the Stonewall Inn itself.

The story doesn’t begin in 1969, but instead in the 1840s when the Inn was built as two stable houses to board horses. The Inn continues its story by describing its changing purposes as well as the shifting populations and technologies that surround and shape it.

The narrative slows and lingers on the 1960s, when the Stonewall Inn became a safe space for gender and sexual minorities. In this period, the Inn opened its doors and dance floors to drag queens, gays, and lesbians of all races and religions, but the world outside the Inn wasn’t so open minded.

Police raided the Inn on multiple occasions, harassing, arresting, and otherwise terrorizing its customers. That is, until June 28, 1969 when the Inn’s patrons became so fed up with the violent indignities they experienced at the hands of the police that they began to fight back. Their refusal to be shamed and policed changed the tone, intensity, and publicness of the already existing gay rights movement.

The Inn witnesses the Christopher Street Gay Liberation Day parade on the one-year anniversary of the riots. This event is often considered the first Gay Pride Parade.

Years later, after marriage equality was legalized in the US, the Inn views gay and lesbian couple taking pictures of it… remembering.

There are very few non-fiction children’s picture books about LGBTQ* history and historical actors. Of the few that exist, half are biographies of Harvey Milk, one of which is also by Sanders. Sander’s newest contribution is a welcome and necessary addition.

Sanders tells a hard story well and Jamey Christoph’s vivid illustrations contrast light and dark to communicate the tone of the story and bring the action to life.

I think Sanders may paint the Stonewall Inn of the 1960s a bit romantically as a utopian space where different raced and classed queers blend together. Most accounts I have read describe what went on inside the Inn a bit more critically, noting that class and race divisions were reproduced, not melted away. I think that issue could have been included without detracting from the overall message of community unity. I say this, but I also recognize that choices must be made, especially when creating a story that won’t overwhelm children with historical details.

I highly recommend the book and hope schools and libraries purchase it for their collections. It is a very teachable text that can be discussed in history, social science, civics, or geography units to incorporate LGBTQ history into the curriculum!