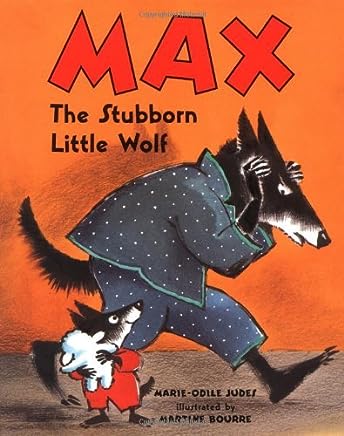 Max: The Stubborn Little Wolf (1996), written by Marie-Odile Judes and illustrated by Martine Bourre, is the story of a young wolf who wants to be a florist when he grows up. His father, a hypermasculine wolf, is sure he’ll go mad if his son becomes a florist and attempts to change his mind.

First, the father wolf takes the young wolf hunting to endear him to the sport. But his son hates hunting and warns a rabbit of his father’s intentions. Second, he tried to convince his son being a florist is dangerous. The young wolf appreciates his father’s concern and assures him he will be careful. Finally, the father sprays flower scented perfume all over his son’s room while he sleeps so he will become disgusted with the scent. It sort of works! The young wolf decides he wants to be a perfumer instead!

This is a fun, albeit unremarkable book, similar to Munro Leaf’s The Story of Ferdinand, which I would recommend instead.