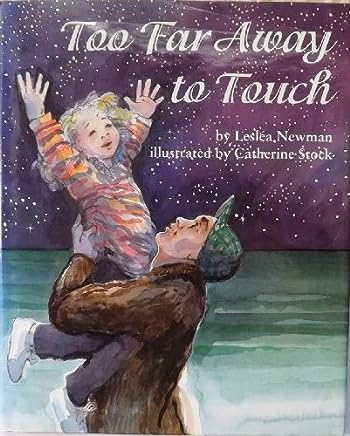 Too Far Away to Touch (1995), thoughtfully written by Lesléa Newman and movingly illustrated by Catherine Stock, follows a young girl as she processes her beloved uncle’s AIDS-related illness.

The child, Zoe, loves her uncle, Leonard, who takes her on adventures in New York City when he visits her. On one visit Zoe plans to tease him by pretending she’s found his lost marbles in his thick head of hair. Things don’t go quite as planned because he’s wearing a beret when he arrives, so Zoe saves the trick for later.

Leonard takes Zoe to a planetarium. They enjoy sitting together while looking up at the heavens. When Zoe asks Leonard how far away the stars are, he wisely answers: “Too far away to touch, but close enough to see.” This phrase reoccurs through the text.

After the show Leonard purchases a surprise for his niece at the gift shop and they go to a café. At the café, Zoe remembers the trick she wants to play on her uncle and asks him to remove his beret. When he does, she is surprised that his thick hair has transformed into thin spotty wisps.

Leonard explains that the hair loss is part of his illness. Zoe asks if he will get better soon, but he doesn’t know.

When they arrive back at Zoe’s, Leonard banishes Zoe from her bedroom and sets up the surprise he purchased for her in the gift shop. When she enters her bedroom, it is to a ceiling full of stars reminiscent of the planetarium.

Several weeks pass before Leonard’s next visit. This time his partner, Nathan, joins him and they take Zoe out of the city and to a beach where she can see the stars.

At the beach, Zoe questions Leonard about his illness, which he identifies as AIDS. He explains that he may die soon. Zoe asks him where he will go when he dies, and he responds honestly that he doesn’t know. To comfort her he says, “Too far away to touch, but close enough to see.”

Newman is a brilliant storyteller. This is an amazing book that gives illness, loss, and grieving children the dignity they deserve. I particularly appreciated Leonard’s ambivalence about an afterlife, and his general openness with his young, but quite clever and sensitive niece. Both Leonard and Zoe are given dimension and depth, which brings their love for each other, and their shared pain at the idea of loss, to life.

The illustrations pair wonderfully with the text, setting a somber tone while expressing the loving relationship shared by Zoe and Leonard gorgeously.

Like all of Newman’s creations, this is a lovely book and important snapshot of LGBTQ literary and cultural history.