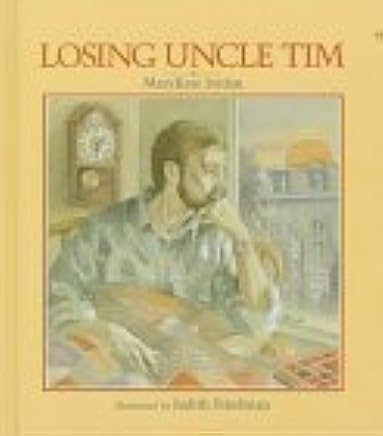 Losing Uncle Tim, written by MaryKate Jordan and illustrated by Judith Friedman, was published by Albert Whitman & Company in 1989. It is narrated in the first person by a boy, Daniel, who is processing the illness and eventual death of his uncle due to an AIDS-related illness.

The story is breathtakingly painful. It beautifully captures the relationship between Daniel and his uncle, Tim, as well as Daniel’s deep emotions. Friedman’s illustrations, which face Jordan’s text, look like snapshots from a photo album. This technique provides a sense of intimacy and urgency as the story progresses.

Losing Uncle Tim is the earliest book I have identified that deals with children processing the AIDS-related deaths of loved ones, although later texts like Patricia Quinlan’s Tiger Flowers (1994), Lesléa Newman’s Too Far Away to Touch (1998), and Jeannine Atkins’ A Name on the Quilt (1999) all explore the important topic with depth and empathy.

I think this would be a wonderful book for families to read together as they discuss illness and loss. Although the specificity of AIDS is present, for example, Daniel has heard AIDS is contagious and worries he might catch it, the text is also open enough to allow readers to use it to sort feelings about their own experiences with sickness and death. It is also speaks to an important moment in US history.