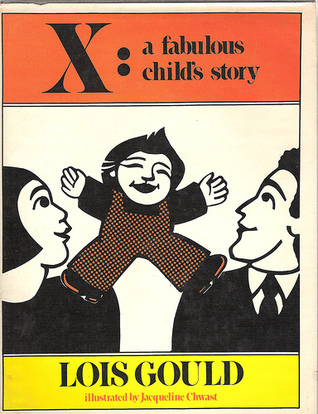 Written by Lois Gould and first published by Ms.  in 1972, X: A Fabulous Child’s Story, was republished in 1978 by Daughters Publishing Company with illustrations by Jacqueline Chwast. The short story that became a picture book challenges the idea that gender is a natural expression clearly connected to the sexed body. Instead, it suggests that gender is a learned behavior that restricts freedom.

X is part of a “Secret Scientific Xperiment.” When Baby X is born, they are not assigned a gender, and to keep others from gendering them, X’s parents do not share their sex assignment. Things become difficult quickly, revealing the degree to which gender shapes our interactions and expectations.

X’s extended family want to know if X is a girl or boy as soon as they meet X. When they are not told, they leave in a huff. More issues occur when X’s parents try to purchase toys and clothes for them. Luckily, unlike most children, X came with a lengthy instruction manual created by very important scientists.

Soon it is time for X to go to school and that’s where the real challenge begins.

Everything about school is gendered: how children line up, play, go to the bathroom, even how they gossip! Gould’s descriptions of how unnecessarily gendered schools are still rings true.

At first X deals with bullying at school, but soon most of their peers realize “X is having twice as much fun…”. In fact, many of the children are “queered” by X. They realize they can challenge gender stereotypes too! A football playing boy starts bringing his sister’s doll to school. A little girl takes to the monkey bars.

The parents of these children are not happy with the transformations they see. One by one they refuse to let their children play with X. Eventually the parents use their power to demand X be Xamined to see if they are a girl or boy. The Xperts simply reveal that X is not mixed up about their identity. The Xperiment has worked!

Many of the themes addressed in X: A Fabulous Child’s Story are present in post-2000 picture books that explore the identities and experiences of gender creative and transgender children. However, the book is dated. First, X is referred to as “it” whereas in 2019 we would more likely use the term “they.” Second, and importantly, the “truth” of X’s identity remains written on the body and will eventually be revealed. These days we tend to have more complicated and nuanced understandings of the body, the sex binary, and their relationship to culture.

That being said, this text is clearly a harbinger of things to come that informs many post-2000 children’s picture books that challenge gender binaries. Although it is not a must read for children — far better books exist in 2019 — it is a must read for academics studying LGBTQ picture books, especially those of us interested in creating a genealogy!