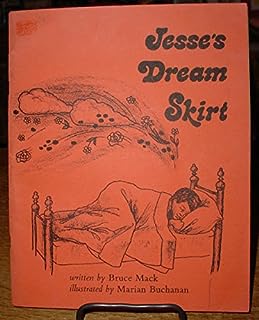 Jesse’s Dream Skirt (1979) is a Lollipop Power, Inc. publication written by Bruce Mack and illustrated by Marian Buchanan. The opening image depicts a semi-circle of ethnically diverse men in traditional cultural attire framing a young boy wrapped in a sheet. The text reads: “There are and were and always will be boys who wear dresses and skirts and things that whirl, twirl, flow and glow.”

Image and text position the young boy, Jesse, as part of a long line of boys and men who wear dresses and skirts. Although not a very enlightened approach to history or genealogy, the awkward first impression shouldn’t detract from the rest of this very good picture book.

Jesse dreams of skirts and one morning, when he wakes up, he tells his mother about his dream. He asks her if he can have a skirt like the one in his dreams. She agrees but acknowledges that some people might make fun of him. He tells her it is okay and they agree to make a skirt.

Along with depicting a skirt-loving boy whose mom quickly affirms his desire, Jesse’s mother appears to be single, which further disrupts dominant 1970s norms and values about acceptable families, norms and values that certainly linger today.

After making the skirt with his mother, Jesse is excited to show it off at school.

Jesse’s preschool teacher, Bruce, is a black man, which challenges the idea that men cannot nurture. His teacher, like his mother, accepts the skirt. He even tells Jesse that he looks like “a butterfly that has just come out of its cocoon…”.

It is the children in Jesse’s preschool class who police his gender. They mock him and call him a sissy. He seeks comfort from Bruce who wisely intervenes by addressing the issue with the class. They explain that they’ve never seen a boy in a skirt, which is why they’re mocking Jesse. A discussion about gendered clothing expectations ensues. Most of the children come around and accept Jesse’s skirt. Bruce, the best preschool teacher ever, even wraps a piece of cloth around his waist, so it looks like a skirt. Others in the class follow.

This is a phenomenal book, but sadly it is out-of-print and difficult to find. I was lucky to borrow a copy through Interlibrary loan.

If you can get your hands on it, it will pair brilliantly with Marcus Ewert’s 10,000 Dresses and likely prompt fascinating conversations as children compare the texts.

I’d love to see Jesse’s Dream Skirt reissued with updated images. Even thirty years later it’s a story we need. I particularly appreciated the depiction of a black man as a nurturing figure who accepted Jesse and facilitated a powerful discussion about gender in the classroom. A great book that shouldn’t be forgotten!