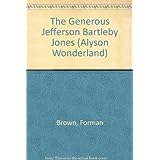 The Generous Jefferson Bartleby Jones (1991) is a delightfully quirky children’s picture book, written by Forman Brown and illustrated by Leslie Trawin. Outrageous rhymes and illustrations work together to communicate the story of Jefferson Bartleby Jones who has an unfortunately lengthy name but a fabulous family. He spends three days of the week living with his dads, and the remaining four days with his mom.

Jefferson Bartleby Jones, Jeff for short, talks about how amazing his dads are so much that his friends Chad and Kim start feeling really bad their own dads don’t spend much time with them.

But, Jeff is generous and wants his friends to experience the happiness his dads give him so he begins to invite them out on his weekend adventures. One weekend he pairs a friend with each dad and ends up alone. He feels abandoned until all four of them show up to take him for ice cream.

What a fantastic find!! This is an irresistibly over-the-top book that will make kids giggle while introducing them to a variety of family forms and demonstrating that “normal” family arrangements aren’t always the best ones. T

he Generous Jefferson Bartleby Jones is  a queer celebration of wonderful gay dads that gently reminds all parents to enjoy and make time for their children.

All this praise isn’t to say there aren’t issues with the text! Moms fall out of the frame – literally! Chad and Kim’s moms are never mentioned. And, in the one illustration of Jeff and his mom, her body is out of the frame leaving only her profile and left shoulder visible. (I’ll likely have much more to say about this in my book project!)