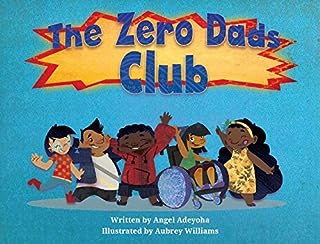 The Zero Dads Club (2015), written by Angel Adeyoha and illustrated by Aubrey Williams, is a delightful Flamingo Rampant Press publication that celebrates multiple family forms. The story unfolds around Father’s Day. Two children with dark brown skin sit next to each other at a desk. One, Akilah, complains to the other, Kai, about being forced to paint an image of a tie. Akilah is upset because their families do not include fathers. Neither girl celebrates Father’s Day, so the compulsive crafting is frustrating. The activist minded Akilah suggests they protest Father’s Day. Instead of a protest, they decide to start a club, which they name the Moms Only Club. They quickly change the name to the Zero Dads Club to account for the club’s growing membership. Some members do not have moms or dads.

The group of first graders meet to support one another and make cards for the grown-ups they love. A celebration of multiple family forms ensues. Cards are created for a transgender mom, lesbian moms, and a single mom as well as an abuela and a tia.

The characters are racially diverse and one is depicted in a wheelchair. Flamingo Rampant Press is committed to showing readers a world as richly diverse as the one they live in.

This is great book to have and share in classrooms around Father’s Day! I love Akilah. Her self-advocacy and proactive problem solving are admirable. This is a fun, celebratory read. It is a wonderful example of children’s activism that will inspire young readers!

This review is part of my “Snapshots of LGBTQ+ Kid Lit” project. I’m working on a book, The Transformative Potential of LGBTQ+ Children’s Picture Books, which is forthcoming with the University Press of Mississippi. Part of my research is identifying and interpreting English-language children’s picture books with LGBTQ+ content published in the US and Canada between 1979 and 2018. Follow my blog to follow my journey!