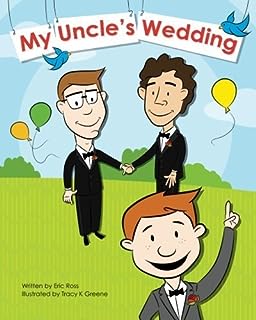 My Uncle’s Wedding (2011), written by Eric Ross and illustrated by Tracy K. Greene, is a story about two men planning their wedding. The story is told from the perspective of their nephew, a young boy named Andy, who is helping them.

Greene’s cartoonish illustration gives the story a fun and slightly silly feel that younger children will surely appreciate. The theme of two uncles getting married is one of the most prevalent in LGBTQ* children’s literature, but Ross has an interesting take. He focuses on planning the wedding.

It’s a fine and nicely told story, but it doesn’t really stand out. Characters are not very developed and beyond planning a wedding nothing happens…. that’s not entirely true… a bird does poop on Andy’s aunt!