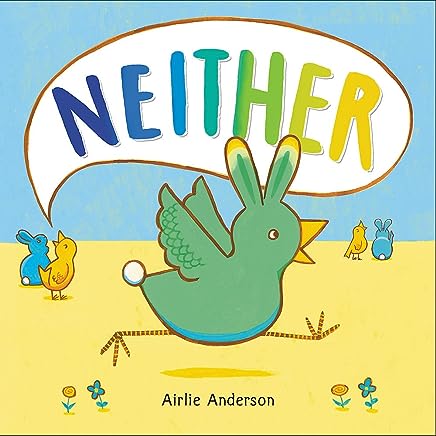 Neither (2018), created by Airlie Anderson, is a study in collapsing binaries. It’s both silly and serious, or perhaps neither of those things, depending on your point-of-view.

Anderson’s book opens like a fairy tale and reads like an allegory. Once upon a time, in a far way place named the Land of This and That, there were blue bunnies and yellow birds. Then something that was both, or neither, hatched. This thing that was both or neither had a bird body, bunny ears, and a bunny tale. Instead of being yellow or blue, it was green. The birds and bunnies didn’t know what to make of the new arrival and so they made fun at its expense, naming it Neither.

They wouldn’t let Neither play with them, eventually angrily telling Neither to go Somewhere Else. Neither flew off, and over a beautiful pastel landscape, before landing in a new place – The Land of ALL. In the Land of ALL, a variety of animals that confound easy classification play together happily. Some renegade bunnies and birds from the Land of This and That even end up there!

I really enjoyed this book! It’s great for talking about difference, acceptance, and kindness with very young children. Anderson’s quirky images are sure to engage young readers. This would be a great addition to personal and school libraries to introduce tough concepts in a fun way. Because of the simplicity of the text, I recommend it for children between three and six. It’s really quite adorable and imaginative. It’s airy enough for audiences to fill in the blanks, telling their own stories about what kind of fun activities Neither will get up to next.