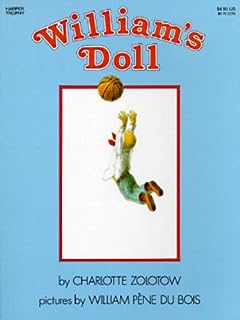 William’s Doll (1972), written by Charlotte Zolotow and illustrated by William Pene Du Bois, is the story of a little boy named William who wants a doll to nurture like he will nurture his future children.

The text opens: “William wanted a doll.” All the ways William will care for his doll are then discussed and mimed. In the first image, William is alone, a closed door behind him, as he cradles an imaginary doll in his arms. In subsequent images, the door has opened, and his brother and male neighbor watch William perform his nurturing routine before rudely interrupting to call him a sissy.

William’s father is no more supportive than his neighbor and brother. Although he knows William wants a doll, he intentionally buys him other, more boyish, things instead. These things include a basketball and train. Although William likes his new toys, he still wants a doll.

There is no mother depicted in the story, but William does have a grandmother, and it is she who eventually buys him the doll of his dreams. When his father gets upset about the purchase, the child’s grandmother explains that having a doll will help him be a good father.

Although wanting a doll could be read as queer desire, Zolotow neutralizes this potential by foregrounding William’s masculinity (he is good at basketball and building) while also making the desire for a doll serve heterosexuality by connecting it to fatherhood; although of course William could grow up to be gay and a dad.

Certainly a subversive text at the time of its original publication, William’s Doll appears quite conservative when read in 2019, especially considering all the books released in the past decade focused on gender expansive youth.