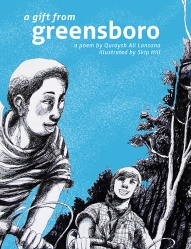 A Gift from Greensboro, a poem by Quraysh Ali Lansana, illustrated in black and white with meaningful splashes of color by Skip Hill, is a joyful story about a friendship between a black boy and a white boy in the segregated South.

The two friends race their bicycles through Greensboro, North Carolina, and hangout in Woolworth’s.

Lansana captures the mood and history beautifully: “We dared lunch counters innocently/ we laughed in the face of history/ him, golden locked and chubby nosed/ me bubbling hot fudge.” Hill’s corresponding image depicts a lunch counter: two giggling boys dip fries in ketchup to the left, on the same page, but the opposite side of the counter, a black man clasps his hand while at the top of the frame a white hand clutches ketchup, which spills over the black man’s hands. The splash of red looks like blood, reminding us that time captures multiple realities in a single second.

A Gift from Greensboro weaves personal and national history. There is an unmistakable maturity to the poem and illustrations. Children and adults will surely have different relationships to the text, which isn’t to say children won’t appreciate it. Instead it will prompt rich inter-generational conversations. This is a lyrical book, gorgeously illustrated, that captures history from multiple angles.