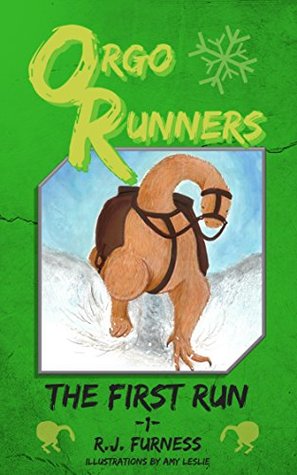 The story is set hundreds of years after a new ice age wiped out most of humanity. Now, instead of living spread-out over the globe, the remaining humans live in one of three places: Scorr Tanta, Eklips, and Port Harmony. Food is scarce in Port Harmony, a newly developed harbor town. Because of this, Port Harmony and the more established Scorr Tanta enter into a precarious trade agreement.

Three friends (Fayth, Megg, and Ink) are convinced to carry supplies between their home and Scorr Tanta, although they have little choice in the matter. They do this on large and surprisingly intelligent animals called Orgo, which they have trained to race. Several subplots are introduced without being developed, including the existence of a group called elrupe’s who seem to have been exiled as well as the existence of a cruel ruler named Rada. The book prompts a lot of questions without providing answers, likely encouraging eager readers to demand the next installment in the series.

I appreciate that the female characters are strong-willed, confident, and capable. Even more, they center the text saving the day more than once. The existence of elrupe’s and the circumstances surrounding their disappearance hint at the possibility of a well developed subplot about racialization, and the division of humans into three distinct spatial areas with different resources also gestures towards the possibility of social critique as the series develops.

This early chapter book is sure to excite confident readers new to chapter books but ready for a challenge as well as more advanced reluctant readers. Additionally, it makes a fun bedtime story read-aloud for families like mine who do that sort of thing!