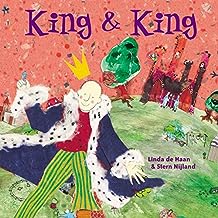 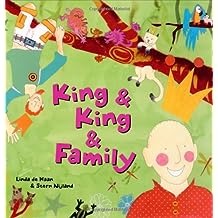 In this version, the queen, crown prince, and their pet cat live together. The very controlling queen orders her son to get married so he can rule the kingdom. As she barks demands at him, spittle rains from her mouth. After a day of being bullied, he agrees to be wed. His mother quickly arranges to have a group of single ladies paraded in front of him.

Almost all the princesses are physically unattractive: one is overweight, another’s arms are disproportionately long, a third wears glasses and has bad teeth, a fourth is very tall and skinny. The last princess is fairy tale princess-pretty. She has long blond hair and an hour glass figure. This princess arrives with her brother: Prince Lee.

The two princes fall in love at first sight. They quickly marry and become known as king and king. Of course, they live happily ever after.

Two years after its English release, King and King was followed by King and King and Family. The same writer/illustrator team created the book, which depicts king and king’s honeymoon. It is illustrated in the same style, which provides a sense of consistency across texts.

When the couple and their cat arrive home a little girl wearing a bright colored tank top and prettily patterned skirt pops out of their suitcase. She has a tan-skin tone and is ambivalently raced. The girl is immediately made a part of the family. She shares her adventures with the couple, although the reader is not privy to her story.

King and king officially adopt her, and it is noted that the process involves a lot of paperwork.

I am not a fan of these books. I don’t appreciate the abject depictions of women in the first book, and I don’t understand the choice to make a little girl magically appear in the two kings’ suitcase once they arrive home in the follow-up.