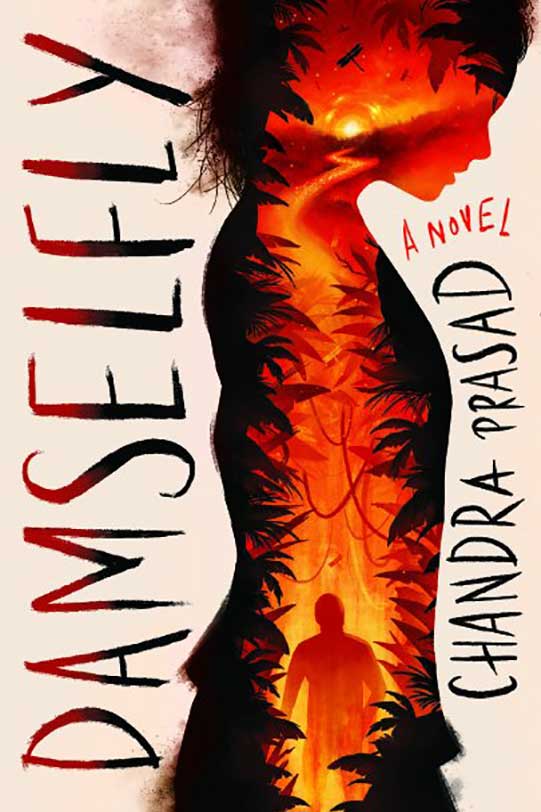 A few kids. A crash landing. An island that may or may not be inhabited (or possessed). It’s the stuff of a story we don’t seem able to stop telling.

William Golding’s 1954 version, Lord of the Flies, lives on in our collective imagination, resurfacing in songs by Iron Maiden and on random television shows like The Simpsons. Golding’s take was inspired by The Coral Island: A Tale of the Pacific Ocean, an 1858 book by R. M. Ballantyne. In Ballantyne’s version the kids who crash on the island are moralistic cherubs with a penchant for converting cannibalistic barbarians (yes, it is racist). Golding wasn’t buying the moral simplicity proffered by Ballantyne and created a dystopian parody emphasizing human nature as well as the relationship between humans and nature.

In 2018, Chandra Prasad took a stab at it. Prasad’s version, Damselfly, introduces gender, race, ability, and class into the basic plot Golding develops in Lord of the Flies, and, like Ballantyne and Golding, Prasad’s book is both a product and critique of its times, albeit in the case of Ballantyne, an unintended critique.

The story is told from the point-of-view of Samantha (Sam) Mishra, a biracial Indian and white teenage girl who lacks self-confidence and doesn’t quite fit in with her wealthy boarding school companions because of her class background. Samantha is best friends with the super smart Mel, a white girl who doesn’t fit in with the boarding school crowd either, but unlike Sam, Mel doesn’t care.

The very wealthy, very beautiful, very assertive Rittika, who is Indian, creates a skin-tone based dichotomy to explain the suitability of her peers for life on the island: “Golds” vs. “Pales”. According to Rittika, Golds are survivors, whereas Pales are not physically capable of adjusting to life under the sweltering sun.

Sam never feels Indian enough because of her mixed heritage, and she clamors for Rittika’s acceptance even when it means betraying her best friend.

Along with race, ability is addressed. First, in Sam’s memories of her sister who has an eating disorder, and second, through the inclusion of a character, Anne Marie, who needs medicine and whose mental health suffers as a result of not being able to access it on the island. Anne Marie is very similar to Golding’s Piggy, who is hyper-vulnerable in Golding’s version of the tale as a result of a visual impairment that requires him to wear glasses.

Other minor characters include: 1) Rittika’s twin brother, who is comfortable living in her shadow, 2) Betty, who is not a big idea person, but executes other people’s plans brilliantly, 3) Pablo, an environmentalist who believes they have been gifted with a pristine island and should be its custodians, and 4) the likable part-Native American Chester, who could be good, but he is depicted as smitten with the book’s beauty and dumb because of it.

I don’t want to give away too much of the plot, because Damselfly is a page turner!

Prasad’s fast-paced plot and engaging depictions of antagonistic human relationships make for an enjoyable read. There is a lot to talk about in the book, and a lot to speculate. It would pair wonderfully with Golding’s text in a high school or college literature classroom. It’s a fascinating parallel or linked text with enough similarities and differences to encourage thoughtful analysis. In fact, there are lots of materials, including discussion questions, available for teachers.

All this isn’t to say the text isn’t without weaknesses. The minor characters are not well developed, this is likely because of the first-person narrative style Prasad uses. A fair amount of action seems unmotivated because the reader doesn’t have access to the motivation. The ending was also a tad disappointing, although it didn’t detract much from the overall book, which is very good. (I won’t get into more detail to avoid spoilers). I recommend the book, minor shortcomings and all!

I received a review copy from the author.