In A Different Pond, author, Bao Phi, and illustrator, Thi Bui, both Vietnamese Americans, create a necessary and impactful story that is both a tribute to their working-class new immigrant childhoods and a valuable #OwnVoices contribution to children’s literature. The story is anchored in a purposeful fishing trip a father and son take to secure food for the family. Rich colors and a creative use of panels provide intimate portraits of the duo. END_OF_DOCUMENT_TOKEN_TO_BE_REPLACED 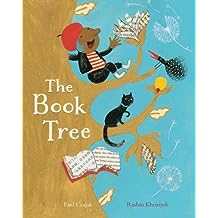 Written by Paul Czajak and illustrated by Rashin Kheiriyeh, The Book Tree reads like a love letter to books in all their sensual glory. Czajak lingers on descriptions of the scent and sound of books as his story of a tyrant’s failed attempt to destroy all books, and a boy’s desire to awe and be awed by stories, unfolds. Kheiriyeh’s textured illustrations complement Czajak’s story and enchant with a bold and deliberate color palatte of red and teal with hints of yellow. Each illustration contains elements at once familiar and unfamiliar: teakettles precariously balanced on heads, oversized dandelion puffs blowing boys away, and regal ladies unsure how to use umbrellas. A story about pleasure, passion, and wayward pages, The Book Tree manages to be both timely and timeless. END_OF_DOCUMENT_TOKEN_TO_BE_REPLACED

In Anna Humphrey’s Megabat, a boy named Daniel leaves his friends, school, and home behind when his family moves to a new city. He is unenthusiastic about his creaky, kind of creepy, new house and resolutely refuses to try to make friends; that is, until he is jolted out of his loneliness by a talking bat who has taken up residence in his new attic bedroom. The two quickly bond over shared sadness and Star Wars. It turns out the bat, who is from Borneo, wandered into a shipping container and accidentally ended up half way around the world. Once Daniel meets the talking bat, who he names Megabat, the central conflict of the story shifts from getting Daniel comfortable in his new home to getting Megabat home. END_OF_DOCUMENT_TOKEN_TO_BE_REPLACED

I’ve been reviewing children’s picture books exclusively, but I’m going to expand into YA with a review of Chandra Prasad’s Damselfly – coming soon!

Do it! I started blogging to help spread the word about diverse, socially engaged, children’s literature. Be a microphone for all the beautiful diverse voices in children’s literature. Nominate your favorite #kidlit and #ya books for a Cybils Award. Change a bookshelf for the better!!! Here’s the link: http://www.cybils.com/2018/10/the-2018-nominations-are-now-open.html

The 2018 Nomination categories include:

Follow this link to nominate your favorite books in all our categories. You have until October 15th.

I’m a judge for Easy Readers and Early Chapter Books. Put me to work!