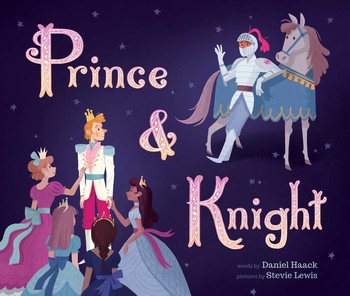 Prince and Knight (2018), written by Daniel Haack and illustrated by Stevie Lewis, immediately reveals its affinity to fairy tales. The title page depicts a typical fairy tale cartography: a castle surrounded by water and the far simpler homes of villagers. This broad overview of every fairy tale landscape, located somewhere far away, quickly shifts to the castle itself, which is lit from the inside against a blue night sky. Unsurprisingly, the text that hovers over the castle reads: “Once upon a time, in a kingdom far from here…”.

The facing page continues to zoom in, this time to a rosy-cheeked golden-haired prince resting an elbow on a balcony as he stares off into the distance wide-eyed. Of course, this is usually where we would be introduced to our distressed damsel waiting, Rapunzel-style, to be rescued. But Prince and Knight both is and isn’t that story. From the beginning it subverts fairy tale tropes by inhabiting them with a queer difference.

The text’s conflict is also quite generic: the prince must be married to inherit the kingdom. We are now invited into the castle. The prince and his parents sit together at a long dining room table that stretches across the two-page spread. King and queen glance at their son worriedly, insecure about what the future holds amidst the opulent red and gold tapestries. The text reads: “His parents knew that soon, it would be time he took the throne. But with a kingdom so grand, the prince could not rule alone.” The three set off to find the dapper prince a “worthy bride.”

In the two-page spread that follows, a stream of proud parents offer their bejeweled daughters to the attractively available prince. The prince rejects princess after princess telling his parents he is “looking for something special in a partner.”

We are quickly returned to the castle, although the royal family is left behind, only to find it in fiery disarray. A dragon is destroying the kingdom.

When the prince hears about the fire, he bravely mounts a horse and rides through a lush green forest to save his village from sure destruction. His confrontation with the dragon is enveloped in a cool blue. The prince stands before the open-mouthed dragon, sword drawn. But, the prince is not alone, a knight in full armor is on the cliff behind the dragon.

Prince and knight work together intuitively; it is as if fate, or a century of similar stories, have brought them together. The knight uses his shield to direct sun into the dragon’s eyes as the prince leaps onto the distracted dragon, subduing him with fancy knot work. Knight and prince have defeated the dragon, but once the dragon is no longer a threat the prince trips and begins a steep fall to the ground. The knight jumps onto his horse and races to the prince swooping him up before he makes contact.

The knight continues to hold the prince as they exclaim that they both saved the other’s life. These two are partners, perhaps worthy of ruling the kingdom together.

The next spread depicts the villagers gathered around the town square as the prince and knight share an intimate embrace on a large fountain, the clear focus of the image and the action depicted within it.

Back inside the castle, the king and queen are elated.

The text closes, as familiarly as it opens. Prince and knight, eyes closed, fingers entangled, lean in for a kiss. The text reads: “And on the two men’s wedding day, the air filled with cheer and laughter, for the prince and his shining knight would live happily ever after.”

This is a lovely book to help disrupt the blitz of heteronormative fairy tale romances found in most early reader’s libraries. It’s a familiar tale that is defamiliarized in Prince and Knight, not only because it represents a gay couple, but because it represents equal partners. Interestingly, it also puts into relief some of the gender stereotyped endemic to fairy tales that have not been updated to reflect shifting gender expectations. This is a fun book that celebrates same-sex love and desire. Highly recommended for all prince and/or princess loving little ones.