Rob Sanders’ Pride: The Story of Harvey Milk and the Rainbow Flag 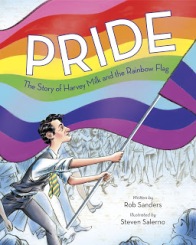 Written by Rob Sanders and illustrated by Steven Salerno, Pride: The Story of Harvey Milk and the Rainbow Flag (2018), is an invaluable contribution to children’s literature that should be in every school and public library. Although the story focuses on Harvey Milk, a historically significant figure all children should learn about, it does so by positioning him within a vibrant community. As a result, the brightly illustrated picture book gives young readers a strong sense of the importance of community belonging and community building, while also paying homage to a courageous figure in US history.

The story begins with a barefoot Harvey Milk laying on a field of green. The text reads: “Harvey Milk was an ordinary man, but he had an extraordinary dream. That dream would change history.” Milk’s dream was of equality at a time when gay men and lesbians were all but invisible in national life.

Milk affected political change from within the political system, becoming the first openly gay man to hold political office in the US. Along with running for office, Milk worked with the gay and lesbian community to increase visibility and, a point that reverberates throughout the text, encourage hope for change.

Sanders focuses the story on Milk’s role creating the Rainbow Flag, an important symbol of community that he developed with his friend Gilbert Baker. I appreciate that Sanders foregrounds the significance of Milk the man without removing him from the community he was such an integral part of, an issue that often arises in stories about significant figures. Sanders is quick to note the Flag as a collective project: Milk understand the importance of a unifying symbol, Baker designed the flag, and a group of volunteers brought the idea to life. The flag was introduced June 25, 1978.

A wonderful two-page illustration depicts a dozen people using versions of the Rainbow Flag to symbolize their sense of pride, hope, and community. This illustrates that Milk accomplished something meaningful, played a pivotal role in forging a movement. The sense of accomplishment introduced is particularly important since, on the next page, the reader is informed: “Five months later – on the morning of November 27, 1978 – Harvey and the mayor of San Francisco, George Moscone, were assassinated. Their lives were taken by a man who did not think like Harvey, or feel like him, or love like him.” Milk’s assassination is as delicately introduced as possible for young readers, but the reality of the loss and its homophobic motivation are recorded frankly. Sanders does not linger on loss, although sadness is very much present, instead he describes how Harvey’s work lived on after his death.

In a beautiful illustration, heavy with the oppositional force of light and dark, we see thousands of people honoring Milk and Moscone.

In the next illustration, dozens of Rainbow Flags spell out the word “hope” against a sky-blue background. Sanders explains that the flag Milk helped create became a symbol of pride and hope. The text continues to show images of the Rainbow Flag on bumper stickers and t-shirts. The Flag is everywhere, now a near ubiquitous symbol of Pride.

The second to last illustration is of the White House “awash in the colors of the Rainbow Flag” on June 26, 2015. Sanders makes the interesting choice of not revealing that on this date the US Supreme Court legalized marriage equality, perhaps allowing the reader to ask more questions and seek more answers about LGBTQ history.

The book closes with an image of Milk, Rainbow Flag in hand. The text reads: “Harvey’s dream became a flag for us all.” It is easy to turn a person into a symbol, like the Flag, but Sanders remains committed to a story of collective action and community empowerment, even as he rightly emphasizes Milk’s critical role.

Bibliographical notes, a time line, a brief list of further readings, and photographs of people and events depicted in the text help parents and teachers explain LGBTQ* history and explore LGBTQ* stories. More resources are available at Sander’s personal website.

Although LGBTQ* individuals have far more rights than ever before in the US, those rights are precarious and always under siege, Harvey Milk’s vision and investment remain timely and inspirational, which is why this important contribution, to what is a small group of children’s texts about LGBTQ* history and culture, is so welcome and necessary. The fact that it tells an important story without providing too much historical detail for young readers, and without becoming dull and didactic, is impressive.

Sanders tells a difficult story, but he tells it with hope, and Salerno’s illustrations help bring that message home.